So, I’ve got exciting news. First cover reveal. And I’m chuffed to say it’s for an awesome friend of mine, Andrez Bergen. You all know how much I rave about his work, so I thought it was time to help his (and the artist’s) career out a little more. Hype is never a bad thing, right?

Well, I was lucky enough to see a little sneak preview of the WIP cover of his latest novel, Depth Charging Ice Planet Goth. Yeah, it’s a real mouth-full. But man does it sound awesome.

Think female protagonist, set in 1986. Goth/post-punk references, a mystery/crime/comic books/coming-of-age yarn and… a little horror. Set in Melbourne. And not.

Anyway, enough waffling. Here’s the picture. Not the full sha-bang, I’ll have you know, but that won’t happen till sometime in February, when the book’ll be close to released. So…as I said, I got’s to stir up some hype for a fabulous and much anticipated book of 2014.

Without further ado, I present to you “Dancing Puppet” by Kyme Chan, what will be the cover of Depth Charging Ice Planet Goth by Andrez Bergen. 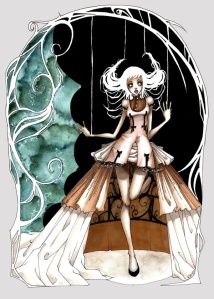 Ain’t it a keeper? I just love the cold, Gothic look. Subtle, I know. And the strings, manipulation, and fear? All hints at what’s to come.

I can’t wait for this one. You can expect a grand review for this bad boy (er, girl). And credit to Kyme Chan. Go check out some of her work here, iff’n you want to. I would.