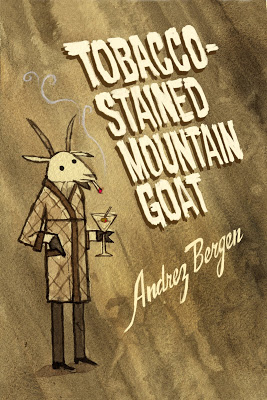 “Every goddamned thing about this Test grated. And let’s be honest here: ‘grated’ is just the wrong word to use. Maybe ‘vexed’ is better? I always liked the sound of ‘vexed.’ It was comfortingly old-school, like something that someone in a Jane Austen adaptation would utter, in a steely British accent, after he mopped his brow, post particularly energetic fox hunt.”

Many people grapple with what the term neo-noir is. Andrez Bergen’s debut wraps up the definition in a nice little bow and amazing story.

His prose, like any good writer, is to die for. Verbose. Not repetitive at all. While heavy at times with a lot of introspection and general details, it fits the story. It works to set up a dark and dank dystopia called Melbourne. And it helps create the bleak nature to his novel as he points to the atrocities of this totalitarian state.

Could it be cut down to improve the pacing? Yes. But would it have the same effect? Probably not.

“’So you want something old and dusty, then?’

‘Honey, occasionally the past isn’t as dry as some people think—and, let’s face it, dust adds depth.’”

The opening is a tad confusing. I’ll make that clear for anybody who’s put off by it. Bergen throws a ton of cultural references and world-building at you all in one swing. It’s bogged down by a massive internal monologue, but the reflection fits and is oh so noirish. Do not be dissuaded by chapter one. It improves from there.

But the pop references don’t lighten. There may be a glossary at the end, and I may have known most of the name drops, but that still probably won’t startle the casual reader. There’s depth to this novel if you’re looking for it. Bergen plays off of a lot of the hardboiled novels of the 30s along with the noir movie counterparts of the 60s.

Even if you don’t get them, the dialogue (and humor inserted in there) is enough to continue.

“All of it came across like a religious diorama recast by Jean-Pierre Jeunet on bad acid.”

One thing that is defining Bergen is his brilliant usage of dialogue. Conversations flow effortlessly. While there are the first-time kinks around, such as entire conversations without dialogue tags, his banter between the characters is spot on. Top notch. Other reviewing clichés. He writes some of the best wit I’ve read, shoved right alongside Daniel Polansky, Richard Kadrey, and Scott Lynch.

Yes, this was a writer to watch out for. But now, with a third book out (and amazing) I would say Bergen has solidified his standing as a genre melding author who’s pushing the boundaries while at the same time having so much fun.

Even in the bright pockets of humor, there pervades a bleak tone. This novel can be depressing at times. Heart strings are pulled at. Our emotions are moved. It’s a strong thing to do in under 300 pages. Usually, you have to have a good bit of character development, but from the first page, a lot of the cast feels natural.

This is noted from Bergen’s influence in Hammett and Chandler. The narrator is a Seeker (PI) just trying to eke out a living and pay the medical bills of his wife. But things take a turn for the worse when he kills a young girl, a Deviant, his first employed murder.

Things spiral out of control soon after, and we are shown the murder through choppy, surreal dream sequences that spring up in random moments. It can be jarring at first, but rewarding when the pace begins to drag. Mysteries are brought to the light, and twists come out of nowhere. One in particular is flipped at the end of a chapter, truly stunning.

All this amazingness is brought down by the lack of a coherent plot for half the novel. Yes, it takes the staple of noir lines where the mystery is center and turns that into a rambling literary fiction story. Some readers, like with the movie references, will be against this certain take. I found it natural, adding to the character study of our protagonist.

The ending is abrupt. That’s one complaint; Bergen has a habit of doing this, slicing the narrative off to discombobulate the mind, so to say. It’s an aspect of noir writing, to end off key. But I don’t care much for it. A one page denouement would’ve been fine. Instead, the kindle edition plays with your head, stops the story at 75 percent. Was it that big of a problem? No, but one nonetheless. Bergen makes me want to read the next novel in his series that much quicker.

This is what I’d like to call a comfort read. I know that from page one this is going to be my kind of book, whether it has flaws or not. All the stylistic choices of a noir novel were there. We have a formula in place with twists counteracting the known plotline. Sarcasm flows from the tongue, descriptions beautiful on every page, with the bonus of a character that you’ve already dealt with, but don’t mind. You enjoy his company.

If this screams unoriginality, you’re wrong. This is one of the most speculative book I’ve read this year. Bergen takes the tropes of the 30s noir novels and integrates them into his own world, his spectacular setting, drawing it all in on one snappy breath.

What more could I ask for?

“’Dear world, I am leaving because I am bored. I feel I have lived long enough. I am leaving you with your worries in this sweet cesspool. Good luck.’”