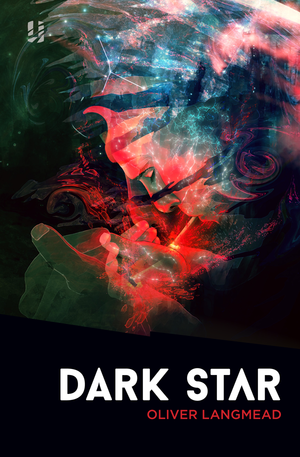 “My lighthouse is no longer lit, Virgil,

Because there are no more boats to warn off.

And five hundred years ago we, well… stopped.”

They say that nothing is original anymore, and oftentimes I am hard pressed to agree. Until now.

The past year has seen little in the way of “knock my socks off” debuts. Truth be told, I’ve found there to be very few debuts on my radar, and even less available to me off the bat. (See Jen William’s The Copper Promise.) But I digress. I could sum this whole review up into one word, but then, that does this story no justice at all. Calling it brilliant is like calling a candle in the darkness refreshing.

It’s something more than that at its core; it’s something haunting and beautiful. Moving. Without a doubt, Oliver Langmead’s Dark Star is one of the most inventive and interesting debuts I’ve read since starting this blog. In short words, it’s a soon-to-be classic, I’m sure of it.

Vivian was a bright girl. Too bright, in fact. Burned her blood and her bulbs out by the local drug on the streets, Prometheus. Virgil, our resident down on his luck cop, is last on the scene with his partner Dante leading him there. It’s a gruesome case, no doubt. Potential wasted and all that jazz. But a bigger hit goes off later that cycle.

In a world without stars, one of the big three light generators has been stolen. Guess who got called into work early? Our protagonist.

Written in a minimalistic style, this epic verse—wait, did I forget to mention that? Kinda important in fact, because the words (or lack thereof one might say) is what makes or breaks a…novel, if you could call it that. This glorified poem walks on the feet of giants, apparent in the choice of naming his duo after the great writer of the Aeneid, the Divine Comedy, and yeah there’s even a nod to Bladerunner, where this Science Fantasy Noir gets its influence most of all.

But as I was saying. Written in sparse sentences (or verse, as I should say), this understated prose is magnificent in detailing the scene in so few words. Such vividness in parsed down style, nothing is minced. Everything is evoked, from the dust on the lamplights to the drip from the rain to the darkness clouding like claustrophobia, eating between the pages. Langmead does the old adage right: Leave something to the reader’s imagination.

This crisp style stays with the dialogue. Plays off the stiff conversations well and adds words in-between, like tone or ticks in body language just in which adjective he chooses to use. It’s remarkable. How an author can create such impactful characterization in such few sentences still astounds me as I’m writing. Of course, Virgil our narrator steals the show as we struggle right along him, taking a journey like the above quoted trip to Troy with his coworker Dante heading the way. He fights with addiction most of all, finding his own light and dealing with obsession. Because anything in this hell is twisted. Who’s to say the junk swirling round his veins is any different than the hope that springs from Dante visiting church.

While most epic stories would show the best in its characters, Langmead dives deep into the psyche of every stage hand. Writing them not at their highs, but at their broken lows most of all. It’s what sets his people apart from the regular detective mulling over life and praying for another bullet in his chamber or another fix in his arm. Everybody is scared, shown off in the abyss once or twice, and why not? It’s a scary world.

“And I find myself longing for shadows;

For a place to hide myself from the light.”

The population of Langmead’s creation is not the most startling thing here. His dark infested streets are awe-inspiring as well, with a literal immersion of blackness for the denizens and our narrator most of all. Vox is no normal place, no camping trip or vacation spot. It’s a living hell, where decadence and time has stripped away most currency to hand us broken lamps and not enough batteries. Light deprived ghosts flitter here and there, people read topographical pictures or braille, while the rich are the only literate in the place.

Even the drug reflects the current air. Prometheus is the literal light of the city, filling the body with a warmth and a clear head it could remind you of heroin it’s so addicting.

In a land dominated by albino rats and eyeless cows, you would think the work would stumble around like the characters. But in some regards, it trips.

The staples of noir are all here. The narrator is a member of the law, with the only crime worth investigating being homicide. He’s a drug addict fallen to the ground almost already, and he has a natural disinterest in religion. Class divides come beside weird dreams or strange passages. The plot has double crosses and more betrayals that a soap opera. A lot of things presented here at face value are predictable. The understated, poignant ending has been shown numerous times, just like the climax staring off into the distance.

But like the lighthouse he climbs to get to his resolution, is the journey spiraling up? Or down?

There are a lot of tropes at play, but as Langmead does with the look at Dante and the Divine Comedy’s descent into Hell, there are minor twists on the usual trick. The plot is not so straight forward as one might guess, having reread it. The one you think does exactly the opposite of his so-called, stereotypical Big Bad plans.

Other notable examples are the excessive uses of a cigarette, but then, there sources of light in these hard times. And what I loved most of all was the backdrop. While there was rain and snow and silence, the real weather permeating the bones of our protagonist was the darkness drifting in—nay, settling for forever! The blackness is the rain, and it’s the little things like this that send me squealing.

The Devil’s in the details.

“For the next few moments I’m at the edge,

Hanging on to my last seconds of light

And looking down at the oblivion,

The blackness waiting to swallow me up.”

But he’s also in the themes.

I’ve already talked about obsession and searching for salvation, so no need to dwell there. Bigger than that, however, is the start. Dante is the escort to this trip, and as I said earlier, is the Lighthouse going down into Hell, or up?

From reading the ending, I would say that the Heaven we all know can very well be Hell after we awaken. All the sin sliming through our lives can be brought to the light and terrify us. Although, the reverse could be argued. It’s the minor feats of greatness that can make Hell not so scary. Though Virgil might be despicable in some of his appearances and self-descriptions, could he not very well be a fallen angel? Perhaps an angel of Justice?

A gentle emergence of brilliance.”

While Virgil may take the wander, Dante flipping in this tale as the guide, one theme gets to me still. It’s blatant near the end, expressly spelled out. I didn’t want to ruin readers about the insight I had getting there, but suffice to say it’s a doozy. Great conceit to round at the story.

And rounding out this review, I’m more than happy to say this debut blew me away. I can see plenty of rereads in the future, helping me shake my interpretation and leaving room for more themes to unearth between the lines.

Because while some may be dark and hidden, I want to make sure Oliver Langmead’s debut is not.

“Way I saw it, the darkness made him mad;

He thought he was doing them a favour,

Saving them from the dark before they grew.”