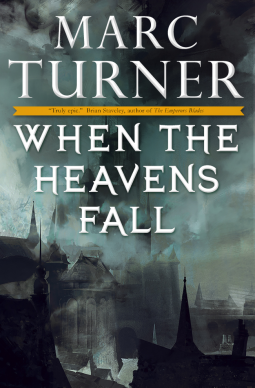 “Such was the tyranny of the gods, twisting devotion until sacrifice was made to feel like a privilege, until allegiance became no more than slavery by another name. And what did the immortals offer in return?”

It’s no surprise I was a little hesitant to review an excerpt for a book. I mean, while this idea is great for publishers (they get two reviews), it means they not only do they get two reviews out of me, waffling on about nothing in particular, but they also get to tease me with this wonderful start. And what a start it is.

Marc Turner’s debut, When the Heavens Fall, is a comfortable piece of Dark Fantasy that ticks all boxes of necessary skirmishes, political intrigue, gray characters, and a depth unseen in what is labeled Sword and Sorcery. Hah.

I was a little fearful of the scope when I opened the book to a lack of one map and a character sheet to boot. Name drops litter the page, and for most reads, that would be off-putting. Here it is not. It’s strange, I’ll admit, but the words Turner uses in accordance with these titles and nudges is extremely vivid and atmospheric. Everything is separately nice and evenly, which is something to say seeing as I only read perhaps the first third or fourth of the book.

If I had to describe the novel in one word, it’d be evocative.

As I said, this is in part helped by the idea of a comfortable Dark Fantasy tale in the mix, but with all that baggage you don’t normally hear insect magic, human-eating horses, and Victorian Lovecraft been thrown around. It’s positively weird and reminds me very much of Rjurik Davidson’s debut, Unwrapped Sky, but without much of the social commentary.

However, with the thick world-building you would expect large swathes of info-dumps and whatnot. I am ecstatic to say that is nowhere to be found, and is probably the biggest praise I can give the novel right now. Sharp, elegant prose leaves no stone unturned, but the details don’t get in the way of pacing and the histories are said in a few sentences.

As I said, evocative.

Wonderful fights scenes abound for the casual reader, and for thematic junkies like me, religious overtones start from the title itself. I’m excited to see how many of these threads and stories pan out.

But more than that, we actually have a strong cast of characters to root for and watch.

Luker is the suitably anti-hero start, rougish and keeping a good distance from everybody. He’s a once Guardian, a spirit-mage you could say, who’s only allegiance now is his two swords and assassin, Jenna.

Romany is a priestess of the Spider, spinning webs of intelligence throughout the city and playing a game underneath her goddess’s nose. She reminded me of a stern, if devious headmistress concerned with manners and mostly information. While she may take a little getting used to, I think she’ll be a hoot in many moments.

Prince Ebon Calidar, our third perspective in this tale, is a soldier haunted by the past and spirits stuck inside his head. He’s a hunter being hunted by the dead, a man easy to root for and hard to beat in both a battle of steel and wit. I was wary of him in the beginning, but by the end of this excerpt, I was genuinely excited to see where his loyalties took him.

Unfortunately, Parolla is perhaps the least interesting of the four characters at the moment. She’s enigmatic and at the same time haughty. Mostly inquisitive, introspective, and at times quick on her feet. She seems like a woman on the hero’s journey right after the mentor has left, but right now, I’m not sure how far she’ll go in that regard.

They’re all searching for something. Religion? Peace? Retribution? The Book of Souls? We don’t know just yet.

Of course, there are interesting side characters, as most Epic Fantasy stories are wont to include. Mottle was a curious specimen, some old wizened magician, friend to Prince Ebon, speaks in 3rd person and crazy, y’know.

I already talked about the assassin, Jenna, but her riley behavior meshes well with Luker already. All the characters do well in what they need to, whereas most might consider this novel pushed by the world, I’d say it’s being pushed by the grim characters that populate it.

All in all, this snippet from the larger tale does many things right. Each chapter gives tantalizing name drops and questions that really need answering. I might’ve been hesitant at the start, but no longer. Marc Turner is quite obviously one to watch out for this year, and I’m going to keep my eyes glued for his arrival.

“After all, how can one lose a game if one has staked nothing on it?”

2 thoughts on “When the Heavens Fall: Preview Excerpt by Marc Turner”