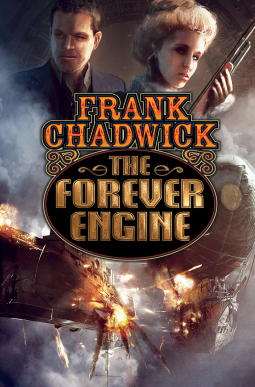 “Is choosing a life path which subordinates you own sense of person to someone else’s a form of suicide?”

Very rarely do I ever enjoy a good time travel tale. The logic isn’t always there, like in say Bioshock Infinite. But for a book so steeped in hard science, The Forever Engine manages to make an intelligent leap in physics. Speculatively speaking, of course.

Jack Fargo is the narrator of this tale, an ex-soldier turned history professor called back to help in a top secret science case. Well, help might be the wrong word. Threatened, then forced into events that are far from his control. But he’s a smart cookie, and decides that instead of moping, or doing the “good” thing, he’s going to get home. I really liked this take on an unfortunate time traveler. It was his knowledge of every single plot point that was grating. Now, I can understand when people see a random dinosaur in the 19th century, and spout off the name of a famous fossil. But when you know the scientific name of said dinosaur…and seven languages…and oodles of physics…and obscure Roman and Middle East history…and how to beat a few soldiers with just a pipe, the character becomes too powerful. A minor fault, though.

When it comes to characters, you would expect caricatures in what appears to be a fast-paced, pulpy action romp. Instead, I received a depth and intelligence to both characterization, world-building, and plot. The Forever Engine’s cover is just a facade. There’s betrayals, motives, heroics, normalizations, and twists aplenty from each member of the cast. The antagonist, “side-kick,” and femme fatale are three of the biggest that could’ve been simple creatures, but turn into frighteningly real people because of how Chadwick has crafted them. Nobody can be trusted, and everybody’s being played. Amazing.

I’m also going to make a request for a story about the South Carolina slave turned military man. He needed more page time, that’s for sure. Such mystery behind his eyes that needs telling.

“I could save her, somehow. But would I be able to face her afterwards, knowing what I had had to do to accomplish that?”

I could say characterization is the strongest thing Chadwick has going for him, but then I would be lying. He’s a world-building whore, and I’m happy with that. I mean, for crying out loud, the Victorian British colonized Mars! Who thinks of this stuff? It’s amazing and fresh, from the smog riddled streets of London to the soaring heights of an airship. The man knows how to breathe life into a setting. The South winning the Civil War, and the bias that goes along with it, may have been a tad cliché, but I’ll let him off because of the rest.

As I said, there’s depth here if you’re looking.

Not only is it in the made-up details, but with the historical references, too. From Prince Albert to Tesla to Kelvin and more, the tiny names (and even Roman emperors) were setting my inner history nerd a flame with excitement. It’s just the icing on the cake in what was a fun Steampunk story.

“Gordon looked at me as if good hearing was for sissies.”

However, there needs to be a fair deal of praise in his plotting. The book starts off strong, catapulting the narrator into a different world, disorienting him and the entire cast. We have a chase, shoot-outs, and other fine filler, but it’s the end, or climax to be specific, that really takes center stage. Every little twist and turn leads up to an explosion, quite literally in fact, just the way I like it. There are a few points of disbelief here and there, but like the South, it’s nothing much. The last chapter, unfortunately, kinda tapers off. And the middle of the books slags in pacing.

If the book didn’t tell rather than show, and Chadwick had better control over dialogue, I could see him becoming a favorite of mine. He has the plotting chops, especially when the idea about the Forever Engine is revealed. Mind boggling. But the story is still rough around the edges, like the fight scenes that move from brilliant and atmospheric to muddled and dark. Chadwick’s a fun writer with depth, just not enough pop and smoothness. Maybe it was the no nonsense writing that seemed to verge randomly into sentimentalism. I’m not sure.

“It came from the notion that if you had an interesting enough story to tell, you would get to finish telling it. But you don’t always.”