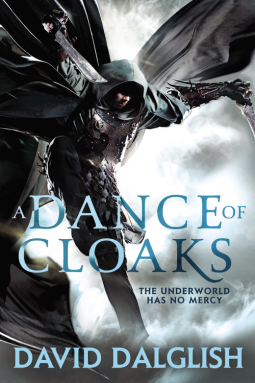 “Sometimes even the most clever man can outsmart himself.”

Back in the early 1900s, serial fiction was a popular medium for novels. David Dalglish’s first book in the Shadowdance series, A Dance of Cloaks, reminds me highly of the pulpy yesteryears. That’s no insult, not directly at least. Dalglish can write chapter endings very well, leaving the reader on a cliff hanger or some tense intrigue to allow a quick scurry onto the next. You’ll have to go to bed after the next chapter, it seems, because the story’s just now getting good. But for all the sharp pacing, A Dance of Cloaks is wracked with a few shortcomings.

Aaron Felhorn is the son of a criminal mastermind, Thren Felhorn, who is the leader of the biggest thieves’ guild in all of the capital. To spoil one of the best prologues I’ve read in a while, his son is being bred to become the perfect heir of the night, a killing machine without remorse. It’s a grand idea, of course opposed by many others, including the lad himself.

But to add to this fatherly antagonist’s plans is the complete downfall of the Trifect, a sort of oligarchy that practically rules the kingdom. Thieves have been at war with them for over five years now, and Thren believes that’s five years too long. So he plans to end it.

His mental schematics and cunning is brilliant. Finally, an extremely intelligent villain.

“You don’t build an elaborate maze to kill a roach. You crush it with your heel.”

Where Dalglish’s planning, his political machinations, and violent, brutal twists excel, he loses on the opposing side. I’m sure that if he had double the weight for a truly Epic story, such as in ASoIaF, Dalglish could’ve made an exceptional novel that pulls on your heartstrings. Instead, we have new character POVs being introduced more than halfway through. Then, some are simply thrown away and forgotten about till the end.

It reminds me of Mark Charan Newton’s second novel, The Nights of Villjamur. There were too many POVs, and while Dalglish keeps the tension high, unlike the former, he overshoots the ending in terms of gratification. The assault on the mansion especially felt rushed. Whereas the epilogue wormed out a few of the rough edges, it didn’t make up for the previous hundred page tumble.

While I enjoyed the simple, no nonsense writing to a degree, the somewhat stiff, philosophical dialogue jarred with it. As said, characters were the biggest flaw of this book, and dialogue (I believe) is a strong extension of the characters. If the base isn’t well-built, the roof might not hold well.

“You must trust your instincts, and learn to listen to not just what is said, but what is not.”

However, depth is a necessity in any Epic. Dalglish didn’t execute near high enough. For a work with so many POVs, the cast was largely concentrated in the capital city. Sure, there were a few scenes in estates outside the land, but never once did we travel to even a different place. Yes, I do understand this is becoming the staple of Fantasy, but this only works if Dalglish presents some city-building. Places like Camorr pop to life without visiting another hamlet. That’s because there’s some breadth to the winding alleyways and mansions. A Dance of Cloaks had none of this, rather focusing on the clockwork of the plot than the machine as a whole. If the religion had been expounded upon, maybe I would cast some leniency, but as it stands, the two factions are drawn as separates, black and white, good and evil. Religion doesn’t work like that.

What I will applaud, on that tangent of religion, is a protagonist being shoved through the ringer, only to gain faith by these tests than lose it. So often do I see hurt characters shrugging off religion when being broken is the strongest catalyst for faith to grow. I don’t see this character arc happen enough in Fantasy. Maybe I’m just stuck under rock.

On the flipside, a certain scene with a religious man was executed poorly. Extremely poorly.

Magic needs guidelines, lest it becomes a deus ex machine for a religion I know nothing about. There is a “hostage” situation that is resolved by the holy man swooping in with his blinding light to save the day. Talk about disastrous. A real disappointment, considering how well Dalglish had written the story so far. Writers are people who box themselves in a corner and manage to jump away from the sides. Dalglish decides to scoop himself up and fly to safety. Completely destroyed the tension. But as always, he brought it back to eleven shortly afterward.

Of course, there were a few hiccups, but the majority of the plot was tight. Pacing and tension granted a ton of fun. Add in a comfortable atmosphere, or, well, setting, and it’s easy to understand why this novel was picked up by a big name publisher. It’s junk food for the mind, if a little darker than the usual kind. While I might have been wishing for a waltz, A Dance for Cloaks’ samba was fine by me.

“’Let them think every breath of theirs is a gift, not from the gods, but from you. Do this, and you will become a god among them.’”

Amazon US: A Dance of Cloaks (Shadowdance)