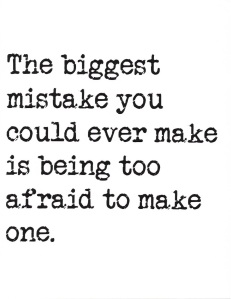 “We must not say every mistake is a foolish one.”
-Cicero

Mistakes. I’ve been thinking about them quite a bit nowadays.

I realize everybody makes them; I’m no exception, but it seems the pile has gotten bigger over the past few days, past few weeks. Hate to say it, but I might project. Bear with me. It will make sense. Hopefully.

Springtime is in the air, making every person, teenagers especially, like dogs in heat. You can see where that goes. My friends are no exception, making vast mistakes all in the name of some hormone malfunction known as adolescence. I’m lucky enough to be able to suppress most of it, beating the drama off with a stick.

Logic is my friend. I do with my mind not my heart. Many times there are bad repercussions, or, better said, different choices from others. To mope and whine, when I lead with my heart, bad things follow. Suffice to say, I try not to do that. And when I try and be good, be nice, be a friend, things don’t go the way I wish for them to. I’m scared that something bad will happen when I’m given an opportunity from God. I admit that.

So I’m cold, heartless. I try not to make mistakes, no matter how miserable it makes me. Yes, I try and be perfect to some extent. I hold the bar higher than possible, but I do not acknowledge that.

These past weeks, I’ve held my mouth shut, picking apart my friend’s mistakes. As of the moment, I have done nothing to them, not pointed out a single mistake by their name. And just when peace settles in and solutions follow on their own, when happiness actually comes to ease my mind, I make a mistake. A big effing mistake.

But this mistake of mine, no matter how much I mope in it, reminds me that I must act. I can’t be stupid. I sure as hell can’t be wrong later down the road. Judgment is a strong virtue of mine, not muddled by the dirt of gray. Some call this foolish innocence. I would argue I’m the biggest cynic you might ever meet. But I am firm in my actions, doing what I truly believe is right. I’ve argued logic against my friend’s mistakes, most minor. I’ve joked about their failings. They have not done the same to me. But that is only because I don’t share my mistakes, don’t open myself up to ridicule besides this.

What this moping rant leads to is the subject of stupid characters in writing. Mistakes are what makes us human, what makes us connect to the protagonists. Being stupid is not a trait well accepted, one I hate with a passion. It is easy to assume the worst; unfortunately, many times I do. But I digress…

I enjoy characters who are really smart, who walk with their brain, who aren’t afraid to be led by principle, by morals that are understood and backed up with sure thought. As said before, I do not like emotional twists. Maybe it is from my own failings at the subject. I don’t know.

What I do know is that this post has rambled on far enough. What you should take from this, besides me being a wuss, is that people make mistakes. It is alright to judge them. It is alright to dislike the idiotic character, even if the author makes them like that. It is not alright to wallow in your own self-pity.

It is not alright to be scared by the verses of happiness and hurt. You must take that bull by the horns and do the right thing, do the smart thing, think it through. You must be motivated to do that. Hopefully this pushed that foot forward. Hopefully.